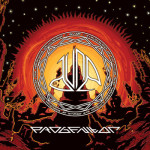 Debut EP ‘Progenitor’ was recorded by Iain MacDuff at The Bottling Plant Studios and mastered by Tom Dring at Vagrant Recordings in Liverpool. It was released on limited edition red vinyl through Wasted State on 7th April 2014.

February 2021 saw the release get a repress on transparent yellow vinyl, available to order online, or from your favorite record store.

“30 mins of finely tuned Prog Sludge, Doom, Space Rock and Stoner Metal. Imagine Mastodon, High On Fire and Baroness jamming together and doing a soundtrack to a fucked up Sci-fi Film.”

“It’s a righteously heavy two sides that the Edinburgh foursome have conjured to announce their arrival, and should be welcome for anyone who longs for a few meaner stretches than most heavy rock is willing to provide.”