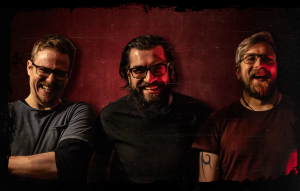 After close to a decade of threatening a solo release, Wasted State Records owner Toni Martone finally started to make good on his threat, recruiting Douglas Millar on drums in late 2017. Very quickly the songs that had started the project, disappeared in favour of new jams and a different vibe playing with a drummer brought.

New songs took shape and the pair decamped from their rehearsal space to Edinburgh’s Chamber Studio to work with producer Graeme Young on shaping the album in May 2019.

What they emerged with possibly defies classification, drawing on the pairs personal, eclectic music tastes. If pushed for a genre, Desert Punk is where it would probably lie.

Their debut album, “If…” is available to pre-order now!