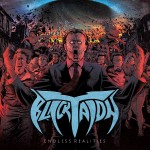 United by a desire to create uncompromising thrash metal, Black Talon began with a jam session in mid-2010 that resulted in enough riffs to sink an aircraft carrier. Fueled by the positive response to their early performances, Black Talon recorded a 3-track demo that provided a snapshot of their still-developing sound in early 2011, and followed that with the release of the ‘Incinerator’ single and video the following year. Over the past four years they have honed their exhilarating, unpredictable live shows by playing all around the UK; sharing stages with bands such as Warbringer, Onslaught, Gama Bomb, Havok, Xentrix, Skeletonwitch, Aura Noir and more.

Musically, Black Talon naturally take their cues from classic thrash in the vein of Forbidden, Exodus and Testament but are not just another clone ‘revival’ band content to rehash a few riffs from the 80’s and add some lyrics about drinking beer. Instead, their goal is to build ambitious, twisting songs that combine modern technical flourishes with the straight-up speed, memorable hooks and social conscience of their thrash metal forefathers.

“Thrash is Thrash, and Black Talon is great Thrash”